In 2011, I began working for Seminaries and Institutes of Religion of The Church of Jesus Christ of Latter-day Saints. In this job, I learned about the Seminary Basic Doctrines–11 statements on some of the most fundamental and important doctrines of the gospel of Jesus Christ. These doctrinal statements were formulated for a couple of reasons: 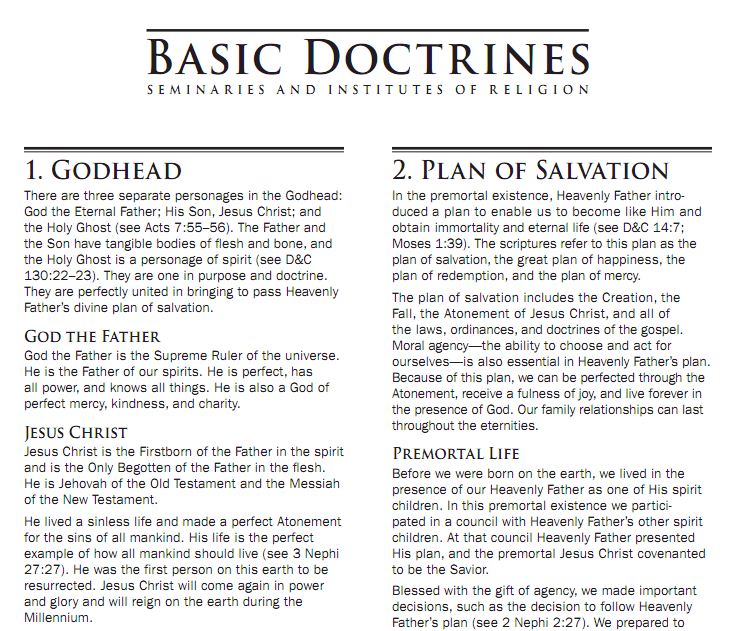 I couldn’t agree more that one of the best things future missionaries can do to prepare for the mission field is to strengthen their knowledge and testimony of the basic doctrines of the restored gospel of Jesus Christ. Therefore, in the coming weeks and months, I plan to devote several posts to explaining and testifying of the basic gospel doctrines.

1. The Godhead
There are three separate personages in the Godhead: God the Eternal Father; His Son, Jesus Christ; and the Holy Ghost (see Acts 7:55-56). The Father and the Son have tangible bodies of flesh and bone, and the Holy Ghost is a personage of spirit (see D&C 130:22-23). They are one in purpose and doctrine. They are perfectly united in bringing to pass Heavenly Father’s divine plan of salvation.

2. Plan of Salvation
In the premortal existence, Heavenly Father introduced a plan to enable us to become like Him and obtain immortality and eternal life (see D&C 14:7; Moses 1:39). The scriptures refer to this plan as the plan of salvation, the great plan of happiness, the plan of redemption, and the plan of mercy. The plan of salvation includes the Creation, the Fall, the Atonement of Jesus Christ, and all of the laws, ordinances, and doctrines of the gospel. Moral agency-the ability to choose and act for ourselves-is also essential in Heavenly Father’s plan. Because of this plan, we can be perfected through the Atonement, receive a fulness of joy, and live forever in the presence of God. Our family relationships can last throughout the eternities.

3. Creation and Fall
Heavenly Father is the Supreme Creator. Jesus Christ created the heavens and the earth under the direction of the Father. The earth was not created from nothing; it was organized from existing matter. Jesus Christ has created worlds without number. The creation of an earth was essential to God’s plan. It provided a place where we could gain a physical body, be tested and tried, and develop divine attributes.

4. Atonement of Jesus Christ
To atone is to suffer the penalty for sin, thereby removing the effects of sin from the repentant sinner and allowing him or her to be reconciled to God. Jesus Christ was the only one capable of making a perfect Atonement for all mankind. His Atonement included His suffering for the sins of mankind in the Garden of Gethsemane, the shedding of His blood, His suffering and death on the cross, and His Resurrection from the tomb (see Isaiah 53:3-5; D&C 19:16-19). The Savior was able to carry out the Atonement because He kept Himself free from sin and had power over death. From His mortal mother, He inherited the ability to die. From His immortal Father, He inherited the power to take up His life again.

5. Dispensation, Apostasy, and Restoration
A dispensation is a period of time when the Lord reveals His gospel doctrines, ordinances, and priesthood. It is a period in which the Lord has at least one authorized servant on the earth who bears the holy priesthood and who has a divine commission to dispense the gospel to the inhabitants of the earth. The dispensation of the fulness of times is the final dispensation. It began with the revelation of the gospel to Joseph Smith.

…When people turn away from the principles of the gospel and do not have priesthood keys, they are in a state of apostasy. Periods of general apostasy have occurred throughout the history of the world. One example is the Great Apostasy, which occurred after the Savior established His Church (see 2 Thessalonians 2:1-3). After the deaths of the Savior’s Apostles, men corrupted the principles of the gospel and made unauthorized changes in Church organization and priesthood ordinances.

…The Restoration is God’s reestablishment of the truths and ordinances of His gospel among men on earth (see Isaiah 29:13-14; Revelation 14:6-7)…. The Restoration began in 1820 when God the Father and His Son, Jesus Christ, appeared to Joseph Smith in response to his prayer (see Joseph Smith-History 1:15-20).

6. Prophets
A prophet is a person who has been called by God to speak for Him (see Amos 3:7). Prophets testify of Jesus Christ and teach His gospel. They make known God’s will and true character. They denounce sin and warn of its consequences. At times, they prophesy of future events. We sustain the President of the Church as prophet, seer, and revelator and the only person on the earth who receives revelation to guide the entire Church. We also sustain the counselors in the First Presidency and the members of the Quorum of the Twelve Apostles as prophets, seers, and revelators (see D&C 1:38).

7. Priesthood
The priesthood is the eternal power and authority of God. Through the priesthood God created and governs the heavens and the earth. Through this power He redeems and exalts His children, bringing to pass “the immortality and eternal life of man” (Moses 1:39). God gives priesthood authority to worthy male members of the Church so they can act in His name for the salvation of His children. Priesthood holders can be authorized to preach the gospel, administer the ordinances of salvation, and govern the kingdom of God on the earth. This authorization comes from those leaders who hold priesthood keys.

8. First Principles and Ordinances
“We believe that the first principles and ordinances of the Gospel are: first, Faith in the Lord Jesus Christ; second, Repentance; third, Baptism by immersion for the remission of sins; fourth, Laying on of hands for the gift of the Holy Ghost” (Articles of Faith 1:4).

9. Ordinances and Covenants
In the Church, an ordinance is a sacred, formal act that has spiritual meaning. Each ordinance was designed by God to teach spiritual truths. The ordinances of salvation are performed by the authority of the priesthood and under the direction of those who hold priesthood keys. Some ordinances are essential to exaltation and are called saving ordinances. They include baptism, confirmation, ordination to the Melchizedek Priesthood (for men), the temple endowment, and the marriage sealing.

…A covenant is a sacred agreement between God and man. God gives the conditions for the covenant, and we agree to do what He asks us to do; God then promises us certain blessings for our obedience (see D&C 82:10; 84:33-39). All the saving ordinances of the priesthood are accompanied by covenants.

11. Marriage and Family
“Marriage between a man and a woman is ordained of God” and “the family is central” to His plan of salvation and happiness. “The sacred powers of procreation are to be employed only between man and woman, lawfully wedded as husband and wife.” Parents are “to multiply and replenish the earth,” “to rear their children in love and righteousness,” and “to provide for their physical and spiritual needs.” “Husband and wife have a solemn responsibility to love and care for each other.” “Fathers are to preside over their families in love and righteousness,” and “to provide the necessities of life.” “Mothers are primarily responsible for the nurture of their children. In these sacred responsibilities, fathers and mothers are obligated to help one another as equal partners.” (See “The Family: A Proclamation to the World,” Ensign, Nov. 1995, 102.)