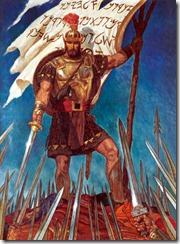 This is the second in a series of three articles on leadership. In the first article on leadership (see Leadership Part 1: Jesus, the Perfect Leader), I quoted President Kimball saying that the scriptures contain many examples of effective leaders that we should study. In that spirit, I’d like to share with you the following excerpt from Hugh Nibley, where he gives a wonderful example of the leadership by Moroni, the military captain of the Nephites, which we learn about in the Book of Mormon. Nibley’s speech, called Leaders to Managers: The Fatal Shift, was delivered at the BYU commencement ceremony on August 19, 1983.

“Moroni was the charismatic leader, personally going about to rally the people, who came running together spontaneously to his title of liberty, the banner of the poor and downtrodden of Israel (Alma 46:12, 19—21).

We are often reminded that Moroni “did not delight in the shedding of blood” and would do anything to avoid it, repeatedly urging his people to make covenants of peace and to preserve them by faith and prayer. He refused to talk about “the enemy.” For him they were always “our brethren,” misled by the traditions of their fathers. He fought them only with heavy reluctance, and he never invaded their lands, even when they threatened intimate invasion of his own.

He never felt threatened, since he trusted absolutely in the Lord. At the slightest sign of weakening by an enemy in battle, Moroni would instantly propose a discussion to put an end to the fighting. The idea of total victory was alien to him—no revenge, no punishment, no reprisals, no reparations, even for an aggressor who had ravaged his country. He would send the beaten enemy home after battle, accepting their word for good behavior or inviting them to settle on Nephite lands, even when he knew he was taking a risk. Even his countrymen who fought against him lost their lives only while opposing him on the field of battle. There were no firing-squads, and former conspirators and traitors had only to agree to support his popular army to be reinstated.

With Alma, he insisted that conscientious objectors [the people of Ammon, parents of Helaman’s 2,000 Stripling Warriors] keep their oaths and not go to war even when he desperately needed their help. Always concerned to do the decent thing, he would never take what he called an unfair advantage of an enemy.

Devoid of personal ambition, the moment the war was over he “yielded up the command of his armies . . . and he retired to his own house . . . in peace” (Alma 62:43), though as the national hero he could have had any office or honor. For his motto was, “I seek not for power” (Alma 60:36), and as to rank he thought of himself only as one of the despised and outcast of Israel. If all this sounds a bit too idealistic, may I remind you that there really have been such men in history.”

Here is an LDS-Church-made video about one of the battles that Captain Moroni led:

In the same talk quoted above, Nibley give some other characteristics of what he called “true leaders.”

“Leadership is an escape from mediocrity. All the great deposits of art, science, and literature from the past, on which all civilization has been nourished, come to us from a mere handful of leaders. For the qualities of leadership are the same in all fields, the leader being simply the one who sets the highest example; and to do that and open the way to greater light and knowledge, the leader must break the mold. “A ship in port is safe,” says Captain Hopper speaking of management, “but that is not what ships were built for,” she says, calling for leadership.” 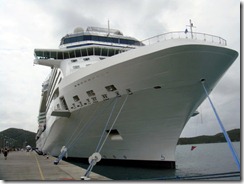 In conclusion, said Brother Nibley, “True leaders are inspiring because they are inspired, caught up in a higher purpose, devoid of personal ambition, idealistic, and incorruptible.” That higher purpose, of course, is the work of the Lord.  This is why missionaries who truly understand the divine work they are doing, bringing souls to Jesus Christ, have the potential to be among the greatest of leaders. May you follow the example of Captain Moroni, and always stand up for your God, your religion, your freedom, and lead by the light of Christ, in your missionary work and in all aspects of your life.