Blog - Latest News
You are here: Home1 / The Joy of Service

I was asked to give a talk in church about the joy of service in relation to a recent trip I made to Houston, Texas with other members of our congregation to help in the cleanup effort in the aftermath of Hurricane Harvey. I thought the joy of service was a good topic for mission prep, so I’m sharing the talk here.

Before talking about the Houston trip after Hurricane Harvey, let me take you back 12 years to the fall of 2005. My wife and I were living in Memphis, TN, and we had two small children. Hurricane Katrina had just hit New Orleans and other cities near there on the coast of the Gulf of Mexico. There was an announcement at church that our congregation was one of many throughout the south that was asked to send a team of workers to New Orleans for a weekend to help clean up. I was excited about the chance to go participate in the hurricane cleanup. The announcement struck me as a rare opportunity to do some great service, and I immediately volunteered. My only hesitation was leaving my wife at home for a long weekend alone with the children, but I knew I would have her support. 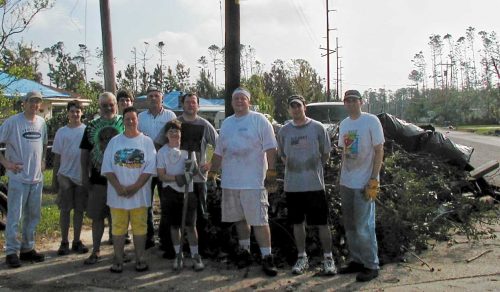 I went with dozens of other men from LDS Church congregations in and around Memphis. On that first of three trips I made to the Gulf coast for Hurricane Katrina relief, we mostly cleared brush, sawed up fallen trees, and hauled yard debris out to the street for many homeowners in the town of Waveland, Mississippi. About a month later, we were called on again, and again I went down to the Gulf coast, this time to the city of Slidell, Louisiana. We spent the bulk of our time on this trip in mucking out a few homes. Then, about a year later, I went to the Gulf coast a third time for Hurricane Katrina relief efforts, and this time we were in the city of New Orleans, Louisiana, part of a crew that replaced the roof of a woman’s home. 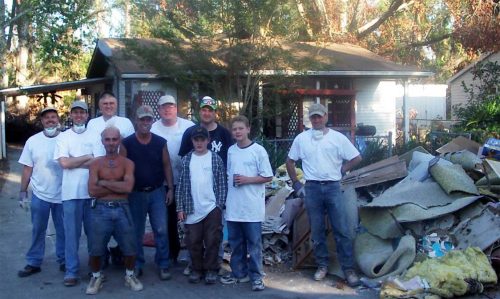 Each of us who went on these trips made many sacrifices of our time. We would leave around 6pm on a Friday night and make the six hour drive to New Orleans, arriving around midnight. We would sleep either in tents on an LDS Church property or in sleeping bags on the floor inside the church. We would work all day Saturday and the first half of the day Sunday. Then we would drive back to Memphis, arriving late Sunday night, so we could all go back to our regular jobs Monday morning. While it was hard work, it was also satisfying and enjoyable to help those in need. I also formed special bonds of friendship with the other men who went on the relief trips. The blessings went both ways, to the givers and receivers of the service, and I was glad I went on every one of those service weekends. At the time I volunteered, I wasn’t sure if I would ever have the opportunity to participate in a massive service project like that again, so I wanted to take advantage of it. As it turns out, 12 years later I would have a very similar opportunity. 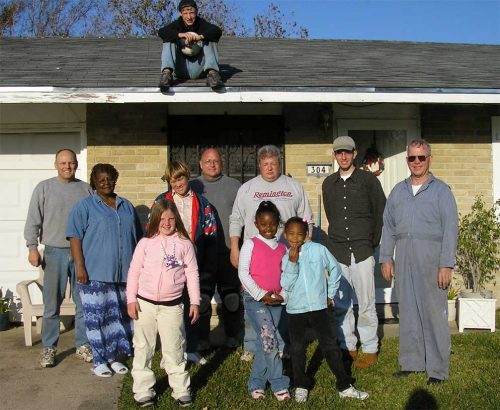 A few months ago, Hurricane Harvey struck the Houston, Texas area, bringing wind damage and much flooding all along the Gulf coast in that region. Once again, the LDS Church sent out a call for volunteers, and once again, when I heard the request, I jumped at the chance to go and help. This time I was able to bring, Abe, my now 13-year-old son, with me on the relief trip. We got up very early on a Saturday morning in September and made the four-hour drive from the Dallas area to Houston. By mid-morning our crew, of about 12 men and women and youth were pulling up the wet and rotting floors of in a home owned by a couple named Barry and Jennifer. In the afternoon, we went across the street to pull wet sheet rock out of the house of a single woman named Beverly. That night, our team of workers were taken care of by some very nice members of the Church who fed us and gave us a comfortable place to sleep. We headed back out to work on Sunday morning after a church service with the sacrament, a couple of testimonies, and a stirring rendition of the hymn How Great Thou Art by a quartet of three women and one man. We did some more mucking and debris removal from the home of a woman named Carolyn, and then we drove back home to the Dallas area on Sunday afternoon. 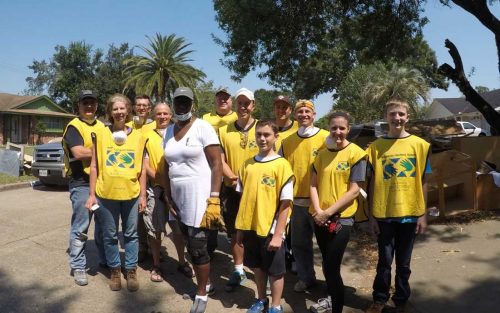 When I was asked to talk about the weekend in Houston and the joy of service, I pondered about what I could say. The thought occurred to me, and I think it was inspiration from the Spirit of God, that perhaps I should talk about what inspires me. What inspires me to drop everything in my life at short notice, drive hundreds of miles, and work all day in hot and dirty conditions to help people I have never met before? Honestly, my next thought was who wouldn’t want to go and do service projects like this. These were wonderful experiences. For me, there is nothing better than to truly help people who have a sincere need.

My father taught me in my youth, by word and example, of the importance of serving others and the joy it brings to the recipients as well as the providers of such service. And I suppose, due to those lessons that I learned in my youth, it has led me throughout my life to seeking out and enjoying opportunities to serve others. Perhaps this is why President Monson has given a similar message to young men and women of the Church. He said:

“Learn in your youth the joy of service in the cause of the Master. …As we look heavenward, we inevitably learn of our responsibility to reach outward. To find real happiness, we must seek for it in a focus outside ourselves. No one has learned the meaning of living until he has surrendered his ego to the service of his fellow man. Service to others is akin to duty, the fulfillment of which brings true joy.”(The Joy of Service, New Era, Oct 2009).

President Dieter F. Uchtdorf has also recently spoken about the joy and other blessings that come to both the givers and receivers of selfless service. He said:

“Every time you notice someone in need and sacrifice your own comfort to reach out in love, the light [of God] expands and swells. Every time you reject temptation and choose purity, every time you seek or extend forgiveness, every time you courageously testify of truth, the light chases away darkness and attracts others who are also seeking light and truth.”

“Christ’s light brings hope, happiness, and healing of any spiritual wound or ailment. Those who experience this refining influence become instruments in the hands of the Light of the World to give light to others. They will feel what King Lamoni felt: “This light had infused such joy into his soul, the cloud of darkness having been dispelled, and … the light of everlasting life was lit up in his soul” (Alma 19:6). (Bearers of Heavenly Light, Gen Conf, Oct 2017)

There is one more thing I have felt inspired to mention regarding the blessings of serving others and that is a lesson that stems from the Savior’s story of the Widow’s Mite. With the estimated damage in the billions of dollars from these natural disasters that I talked about above, my relatively measly contribution to the cleanup and recovery would certainly equate to no more than a mite or two. But one of the points of the widow’s mite story is that God has a different way of measuring, compared to the rest of the world, when determining the value of our actions and contributions.

Most of us are very familiar with this story of the widow with her two mites. It’s found in Mark 12:41-44 and goes like this:

“41 And Jesus sat over against the treasury, and beheld how the people cast money into the treasury: and many that were rich cast in much. 42 And there came a certain poor widow, and she threw in two mites, which make a farthing. 43 And he called unto him his disciples, and saith unto them, Verily I say unto you, That this poor widow hath cast more in, than all they which have cast into the treasury: 44 For all they did cast in of their abundance; but she of her want did cast in all that she had, even all her living.”

While we often call this the story of the widow’s mite, I feel it might be better if we referred to the story as “the widow’s heart.” The point of the story isn’t the money, it’s that by giving all her money the widow demonstrated that she had given her whole heart and soul to God. The wealthy people may have put in a lot of gold and silver into the treasury, but that was not something of much value to God. God doesn’t need our gold and our silver, He can command the elements and create a planet full of gold and silver. What God values is our souls (see D&C 18:10 and Moses 1:39). And the widow, in giving all that she had, demonstrated that she was giving her entire heart and soul to God and that’s why Jesus said that she put in more than all the other rich people.

Now, how does this relate to the joy of service? Elder O. Vincent Haleck explained this concept of the widow’s heart during his recent general conference talk, and he explained how it relates to the joy of service. He talked about the Latter-day Saints of the Pacific and how through the years he has seen them serve and sacrifice, despite their poverty (or as the scripture puts it, their “want”), and as a result they have received great blessings of joy and happiness. He said:

“The heart of the widow who gave her two mites is a heart that will give all by making sacrifices; by enduring hardship, persecution, and rejection; and by bearing burdens of many kinds. The heart of the widow is a heart that senses, feels, and knows the light of truth and will give anything to embrace that truth. It also helps others to see that same light and come to the same measure of eternal happiness and joy. …Let us join as worldwide Saints in doing that which is necessary to have the widow’s heart, truly rejoicing in the blessings that will fill the ‘want’ that results.” (The Heart of the Widow, LDS General Conference, October 2017)

Brothers and Sisters, I know that in our service to others is found the key to receiving joy and happiness. Our duties and our covenants compel us to give freely of our time and talents in the service of others (see Mosiah 18:9), and all the commandments and the whole gospel plan is designed to bring us the greatest joy possible (see D&C 14:7). In John 15:10-11 Jesus explained that this is why he has given us the commandments to love and serve each other: “If ye keep my commandments, ye shall abide in my love; even as I have kept my Father’s commandments, and abide in his love. These things have I spoken unto you, that my joy might remain in you, and that your joy might be full.” I know these things are true.