Blog - Latest News
You are here: Home1 / President Monson on the Divine Inspiration of Every Mission Call

President Thomas S. Monson has testified that divine inspiration attends each and every missionary assignment. He has said, “Too numerous to mention are the many instances where a particular call proved providential. This I know—divine inspiration attends such sacred assignments. We, with you, acknowledge the truth stated so simply in the Doctrine and Covenants: ‘If ye have desires to serve God ye are called to the work’ (D&C 4:3).” (See April 1979 General Conference talk titled, The Army of the Lord)

The following story  illustrates the principle of divine inspiration attending every missionary call and appears in President Monson’s biography, To the Rescue (see chapter 26):

“While attending a stake conference in Paris, France, Elder Monson indicated, as he often does, that he would like to hear from one of the missionaries. As he looked toward the back of the hall, he saw a tall young elder whom he recognized as a son of some friends of the Monsons. He called him forward. As the missionary spoke, Elder Monson seemed to see in his mind a picture of Heber J. Grant in a Japanese garden, the same painting that was produced as a cover for a pamphlet about this famed Church President. He didn’t tell anyone about the experience and even wondered what it meant, assuming that it may have been triggered by his knowledge that President Grant was this elder’s great-grandfather. When Elder Monson returned to Salt Lake City, he looked up the missionary’s parents to give them a report on their son. He learned that another son had just turned in his missionary papers. As Elder Monson later reviewed that missionary’s application, he knew why he had received the strong impression concerning President Grant. He changed the young missionary’s assignment to Tokyo—the city and land where his great-grandfather, Heber J. Grant, had opened the work. Not only did the missionary serve in the land so significant to the family, he was present for the dedication of the Japan Tokyo Temple, an occasion, Elder Monson knew, that would have pleased his great-grandfather immensely.”

Also in President Monson’s biography is the story of when he was again in a missionary assignment meeting and he returned several times to the mission assignment of one young man because he didn’t feel right about it. Finally, President Monson asked on of the Seventies who was assisting him to read to him the entire file of the young man. This time they noticed something they had missed in their initial review–“the young man had learned Spanish ‘at his mother’s knee.’ Elder Monson assigned him to a Spanish-speaking mission, and the Spirit said, ‘Yes.’ ‘It never ceases to amaze me how the Lord can motivate and direct the length and breadth of His kingdom,’ Elder Monson has said, ‘and yet have time to provide the inspiration on the call of a single missionary.'” 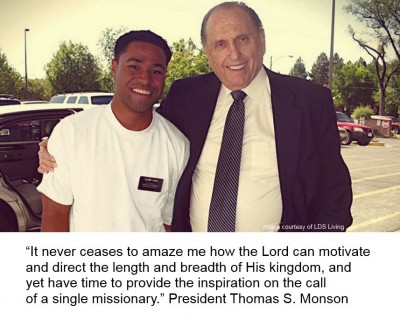 President Monson has viewed tens of thousands of missionary applications while in the process of issuing an equal number of mission calls. Again quoting from his biography, President Monson has said, “Many are the faith-promoting experiences which have occurred in the assignment of missionaries. I so testify. Hardly an assignment day goes by when we don’t have it evidenced that our Heavenly Father has, in an unusual way, prompted us to send particular missionaries to serve in locations, only to learn that this has fulfilled their earnest prayers and, in many instances, the wishes and hopes of their families” (see chapter 26 of To the Rescue).

Not only are mission assignments inspired, but President Monson has taught that the transfers conducted by mission presidents are also inspired. Speaking at mission president seminar in 2011, President Thomas S. Monson spoke of this experience:

I recall, as a mission president in Canada [1959-1962], looking at our list of missionaries and feeling the definite inspiration to move one young man from the city of Belleville, Ontario, to Welland, Ontario. . . . The impression came so strongly that I made the transfer. The next week when I received a letter from his companion, tears came to my eyes when I read: “President Monson, I know you were inspired in sending Elder Smith to us in Welland. We are teaching ten Italian-speaking families whose English skills are limited. In my heart I had been praying for a companion who could speak Italian. You found the only missionary in the mission who spoke Italian.” I thought to myself as I read that line, “I knew nothing about whether or not that boy spoke Italian.” With a name like Smith, you don’t think he is going to speak Italian. I was unaware that his mother was Italian and that she had taught the boy to speak in her native tongue. By listening to the Spirit and transferring him, he was able to carry the gospel to those Italian families in Welland.” (see Missionary Work is Founded on the Doctrine of Christ)

Cost to Get Ready to Go on a Mission

Preparing for the Temple
Scroll to top