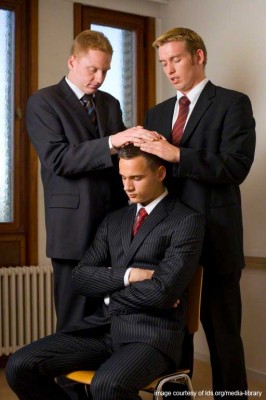 We believe that men and women “must be called of God, by prophecy, and by the laying on of hands by those who are in authority, to preach the Gospel” (Article of Faith 5). When a priesthood leader lays his hands upon the head of a missionary to give him or her authority to preach the gospel, we call it being “set apart” (see D&C 68:14 and D&C 107: 74).

Every missionary should be set apart by their stake president before they depart for the missionary training center (MTC). Only in rare circumstances would someone besides the stake president conduct the setting apart. The setting apart of missionaries should take place as close as possible to his or her departure date. Once the young man or woman is set apart, he or she is a missionary and is expected to obey all the mission rules and standards.

As an example, if a new missionary is leaving on a Tuesday to fly to the MTC to begin their mission, the stake president will generally make arrangements with the family to set apart the missionary on the Sunday or Monday before he or she leaves. (See my related article on traveling to and entering the MTC.)

A day or two before setting apart missionaries, stake presidents are asked to conduct one final interview to confirm the missionary’s worthiness. By this time, missionaries should have received their temple endowment, and young men should have had the Melchizedek Priesthood conferred upon them and been ordained to the office of an elder.

The setting apart should be a special occasion where family members and close friends come together to share in the event. The setting apart of missionaries may take place at the church, in the stake president’s office, or in the family’s home, as directed by the presiding priesthood leader.

At the setting apart, the stake president will usually make a few remarks to help those present understand the sacredness and importance of the mission call. He will then lay his hands on the head of the missionary, set him or her apart as a missionary of The Church of Jesus Christ of Latter-day Saints assigned to labor in the specific mission he or she has been called to. He will then usually pronounce additional words of priesthood blessing as the Spirit directs. Worthy Melchizedek Priesthood holders, such as the missionary’s father, may be invited by the stake president to stand in the circle during the setting apart.

The Church requests that, when setting apart missionaries, the blessing should not be recorded. However, missionaries are encouraged to write about it in their personal journal, making particular note of the parts of the blessing that were especially meaningful to them.

1978 Revelation on the Priesthood