Blog - Latest News
You are here: Home1 / The Role of Women in the LDS Church

With the role of women in the Church and in the priesthood being an ongoing issue in the news, it is likely that missionaries will get asked difficult questions on this topic. Therefore, I thought it wise to prepare future Mormon missionaries for the questions they might get on the subject.

Women and Men Alike are Invited to Come Unto Christ

First, let’s review a couple of statements from the scriptures. The ancient American prophet Nephi said that the Lord invites all people alike, men and women, to come unto Him. Nephi said “he inviteth them all to come unto him and partake of his goodness; and he denieth none that come unto him, black and white, bond and free, male and female; and he remembereth the heathen; and all are alike unto God” (2 Nephi 26:33).

Women and Men Need Each Other for Salvation

The great New Testament missionary Paul taught the Corinthians of the mutual need women and men have for each other, not just in this life, but in the eternities. He said, “neither is the man without the woman, neither the woman without the man, in the Lord” (Corinthians 11:11).

The prophet Joseph Smith further taught this principal when he explained that Celestial marriage in the temple is essential in order for both men and women to receive exaltation in the highest degree of heaven. He taught: “In the celestial glory there are three heavens or degrees; And in order to obtain the highest, a man must enter into this order of the priesthood [meaning the new and everlasting covenant of marriage]; And if he does not, he cannot obtain it. He may enter into the other, but that is the end of his kingdom; he cannot have an increase” (D&C 131: 1-4). 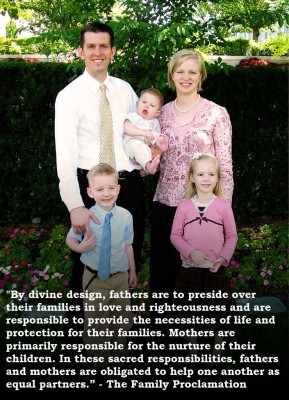 Men and women have different but equally important roles and responsibilities in the home and as members and leaders of The Church of Jesus Christ of Latter-day Saints (LDS Church or Mormon Church). In The Family: A Proclamation to the World, the Church has stated:

“All human beings—male and female—are created in the image of God. Each is a beloved spirit son or daughter of heavenly parents, and, as such, each has a divine nature and destiny. Gender is an essential characteristic of individual premortal, mortal, and eternal identity and purpose.

“…By divine design, fathers are to preside over their families in love and righteousness and are responsible to provide the necessities of life and protection for their families. Mothers are primarily responsible for the nurture of their children. In these sacred responsibilities, fathers and mothers are obligated to help one another as equal partners.”

Julie B. Beck, former General President of the Relief Society, the oldest and largest women’s organization in the world, has said:

“Knowing and defending the divine roles of women is so important in a world where women are bombarded with false messages about their identity. …The only place Latter-day Saint women will learn the whole and complete truth about their indispensable role in the plan of happiness is in this Church and its doctrine. We know that in the great premortal conflict we sided with our Savior, Jesus Christ, to preserve our potential to belong to eternal families. We know we are daughters of God, and we know what we are to do. Women find true happiness when they understand and delight in their unique role within the plan of salvation. The things women can and should do very best are championed and taught without apology here. We believe in the formation of eternal families. That means we believe in getting married. We know that the commandment to multiply and replenish the earth remains in force. That means we believe in having children. We have faith that with the Lord’s help we can be successful in rearing and teaching children. These are vital responsibilities in the plan of happiness, and when women embrace those roles with all their hearts, they are happy! Knowing and defending the truth about families is the privilege of every sister in this Church” (What Latter-day Saint Women Do Best: Stand Strong and Immovable). 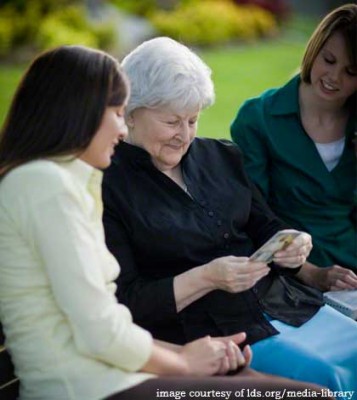 In addition to responsibilities in the family, LDS women serve in some of the highest councils of the Church. They serve as full-time missionaries, presidents of organizations, and as members of committees at nearly every level of the Church. “They serve the Church faithfully and ably. They teach in the organizations. They stand as officers” (The Women in Our Lives, President Gordon B. Hinckley).

“Through serving in the Relief Society, Young Women, and Primary organizations—not to mention their private acts of love and service—women have always played and will always play an important part in helping “bring forth and establish the cause of Zion” (D&C 6:6). They care for the poor and the sick; serve proselytizing, welfare, humanitarian, and other missions; teach children, youth, and adults; and contribute to the temporal and spiritual welfare of the Saints in many other ways” (The Influence of Righteous Women, President Dieter F. Uchtdorf).

M. Russell Ballard, a member of the Quorum of the Twelve Apostles of the LDS Church, gave a seminal address on the topic of LDS womens’ role in the Church in which he said:

“Men and women have different gifts, different strengths, and different points of view and inclinations. That is one of the fundamental reasons why we need each other. It takes a man and a woman to create a family, and it takes men and women to carry out the work of the Lord in the Church. A husband and wife righteously working together complete each other. Let us be careful that we do not attempt to tamper with our Heavenly Father’s plan and purposes in our lives.”

“…I acknowledge that there are some men, including some priesthood leaders, who have not yet seen the light and who still do not include our sister leaders in full partnership in ward and stake councils. I also acknowledge that there are some men who oppress women and in some rare circumstances are guilty of abusing women. This is abhorrent in the eyes of God. I feel certain that men who in any way demean women will answer to God for their actions. And let me add that any priesthood leader who does not involve his sister leaders with full respect and inclusion is not honoring and magnifying the keys he has been given. His power and influence will be diminished until he learns the ways of the Lord” (Let Us Think Straight, 20 August 2013, BYU Campus Education Week Devotional).

One of Women’s Most Sacred Roles: Creation of Life

Elder D. Todd Christofferson, another member of the Quorum of the Twelve Apostles, has also spoken on what he called one of the most sacred roles of women:

“Most sacred is a woman’s role in the creation of life. We know that our physical bodies have a divine origin and that we must experience both a physical birth and a spiritual rebirth to reach the highest realms in God’s celestial kingdom. Thus, women play an integral part (sometimes at the risk of their own lives) in God’s work and glory “to bring to pass the immortality and eternal life of man.”

“…A pernicious philosophy that undermines women’s moral influence is the devaluation of marriage and of motherhood and homemaking as a career. Some view homemaking with outright contempt, arguing it demeans women and that the relentless demands of raising children are a form of exploitation. They ridicule what they call “the mommy track” as a career. This is not fair or right. We do not diminish the value of what women or men achieve in any worthy endeavor or career—we all benefit from those achievements—but we still recognize there is not a higher good than motherhood and fatherhood in marriage. There is no superior career, and no amount of money, authority, or public acclaim can exceed the ultimate rewards of family. Whatever else a woman may accomplish, her moral influence is no more optimally employed than here” (The Moral Force of Women, General Conference October 2013).

Equally Glorious Women and Men Comprise the Noble and Great Ones

In conclusion, I’ll quote from Elder Bruce R. McConkie, a former apostle and noted scriptorian, who used words of great strength and power to describe mother Eve and by extension the potential of all women. “There is no language that can do credit to our glorious mother, Eve,” he says. “Eve—a daughter of God, one of the spirit offspring of the Almighty Elohim—was among the noble and great in [premortal] existence. She ranked in spiritual stature, in faith and devotion, in conformity to eternal law with Michael”. In fact, added McConkie, “Christ and Mary, Adam and Eve, Abraham and Sarah, and a host of mighty men and equally glorious women comprised that group of “the noble and great ones,” to whom the Lord Jesus said: “We will go down, for there is space there, and we will take of these materials, and we will make an earth whereon these may dwell.”( Bruce R McConkie, “Eve and the Fall,” Woman, Salt Lake City: Deseret Book, 1979, p. 68.)