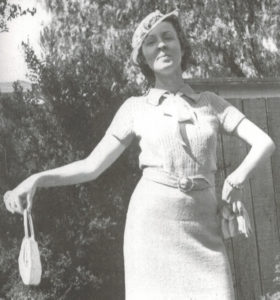 Rasmina Samuelson Price Beck is my wife’s grandmother. She served a mission in her youth to the Eastern States Mission and New England Mission. As I read her account in her written personal history, I was struck by how similar some things are to missions today, but also how different many other things are. The training, both spiritual training and with language and teaching techniques, has vastly improved. But the sacrifice and impact a mission has on the life of a missionary was just as powerful then as it is now.

Rasmina received her mission call to the Eastern States Mission in 1937 and was assigned to report to the Mission Home in Salt Lake City four weeks later. She arrived at the Mission Home in April 1937, and spent only ten days there with about 30 other missionaries. They ate all their meals at the nearby Lion House, the former residence of Brigham Young and his family. The Mission Home no longer stands on temple square, but the Lion House is still there and is available for tours and events.

She went to the Salt Lake temple, with all the other new missionaries, soon after arriving to receive her endowment. While in the temple, they were able to tour many of its room and even climbed the spiral staircase to the roof for a view of the city.

At this time in the history of the Church, there weren’t any formal lessons taught to the missionaries. One day though, the new missionaries spent an entire morning with the prophet, President Heber J. Grant. During her short time in the mission home, Rasmina and the other new missionaries were asked to memorize some scriptures.  They heard many inspiring talks and testimonies to help them understand the importance of their calling. 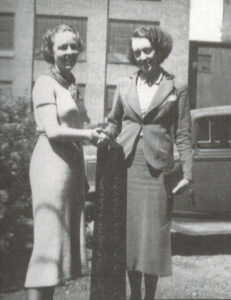 Rasmina says that the time spent in the mission home was just enought to make her realize how much she didn’t know. Before she knew it, the ten days were up and she was on a train headed for New York. The first area she was assigned to work in was East Hartford, Connecticut, where there were no members, so she went tracting every day. Rasmina says that when they had knocked on every door in the town, they started over and tracted the entire area again.

Rasmina tells one funny story of knocking on a door and a woman inside started yelling, “Get away from my door. We don’t want you Mormons here. You are coming to take our women back to Utah for your old men to take as another wife.” Rasmina continues, “I was embarrassed, and knew the whole neighborhood could hear her, but my companion spoke up and told her we were not here for that purpose. Sister Reed (Rasmina’s companion) told her she was having a hard enough time finding a husband for herself and she wouldn’t think of taking any more women back to Utah.”

At this time, missionaries had no set lessons plans, instead they left “tracts” (pamphlets) with people on topics such as the plan of salvation and the Joseph Smith story. When they did sit down to teach people, they were instructed to spend most of their time teaching from the Bible and carrying a message that “we Mormons are your friends.” The message was one of love and service, and says Rasmina, “we tried to carry out this love for all of God’s children with all we met.” 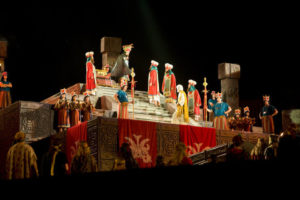 Not long after arriving in her mission, Rasmina was involved in staging “the first Palmyra Pageant, A New Witness for Christ, at the Hill Cumorah.” In the weeks before the pageant, Rasmina and the other missionaries tracted all throughout the nearby communities handing out invitations. The missionaries also spent a lot of time building sets, painting, and rehearsing for the parts they would play in the pageant. Rasmina says, on the night of the first performance, “I was the only blonde Lamanite in King Lamoni’s court.”

Another thing that happened during the first Hill Cumorah Pageant was nothing short of miraculous. Though it had not been raining, “right on cue as the Savior was crucified, the thunder rolled and the lightning struck. We didn’t need to use our sound effects because the skies really put on a show. The trumpets blared, all became quiet, no thunder, no lightning, then the spotlight shown on the top of the hill, the Savior appeared. We all cried it was so dramatic and we were showing the world that the Savior did appear on this continent to His people after he appeared as the resurrected Christ to His people in Jerusalem.”

Testimony of the Book of Mormon

After the pageant, Rasmina had three days where she was waiting for her new companion to arrive. She decided then that she would read the Book of Mormon, cover to cover, for the first time. Says Rasmina, “I loved what I read. I was so grateful for time alone and felt better prepared to serve. I have read the Book of Mormon many, many times since then and thrill with the story and the love our Savior has for all of His children making sure they have His words as a guide to more righteous living.”

Some time after the pageant, the Eastern States Mission was divided, and a New England Mission was formed. Rasmina was called to go to the new mission. She was sent to Springfield Massachusetts and became a senior companion for the first time and was asked to mostly work on strengthening the members there. 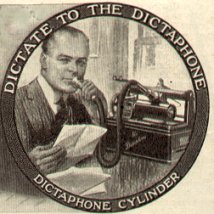 Rasmina was next transferred to the mission office where she served as a secretary for two months while she awaited the arrival of a new companion. One of her main jobs was to type up letters that the mission president would record on a Dictaphone. While in the office, Rasmina put her piano skills to use. There were four Elders in the office who formed a quartet. Once a week they would perform music and the spoken word on a half hour radio program in Boston, and Rasmina would accompany them on the piano.

It was about this time that Rasmina felt that something was wrong with her family at home. She wrote her parents to ask what was wrong and the answer came back that her father had lost his job and that her mother was pregnant. Due to the circumstances, Rasmina’s grandmother had been paying for her mission expenses. Rasmina volunteered to come home immediately to help out the family but her grandmother wouldn’t hear of it. She insisted that Rasmina stay and do what the Lord had called her to do. Rasmina was ever grateful for her grandmother’s love and support.

Towards the end of her mission, Rasmina was looking forward to another pagaent at the Hill Cumorah, but because she had been transferred to the New England mission, it was out of her area and she could not attend. She was able though, to attend a special mission conference at the birth place of Joseph Smith in Sharon, Vermont, which was within her mission boundaries, and this was another meaningful experience to her.

A Stormy Conclusion to Her Mission 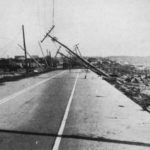 In September of 1938, just one week before she was scheduled to go home, Rasmina lived through a major hurricane that hit the New England area. This was one of the most powerful and deadliest hurricane to hit New England in in the past century. The eye of this Category 3 hurricane made landfall at Long Island, some distance from Rasmina, though the whole New England area was affected. While the power was out, Rasmina and her companion joined the missionaries at the mission office. They lit candles and sang hymns and prayed. Once the water levels had dropped, she got on a train and headed back to the Salt Lake City. Members from her San Diego, California branch, who were attending General Conference, met her in Utah and drove her back to San Diego where she “had a grand reunion with my family.”