I served as a missionary in the Universidad Branch of the LDS Church in the city of Concordia, Argentina from February 19, 1997 to April 22, 1997. Here is a brief summary of my service in that area. Also please visit this summary page about my mission to Argentina which includes the conversion stories of people I baptized and a summary report of each of the areas or wards in which I served.

People We Taught and Baptized 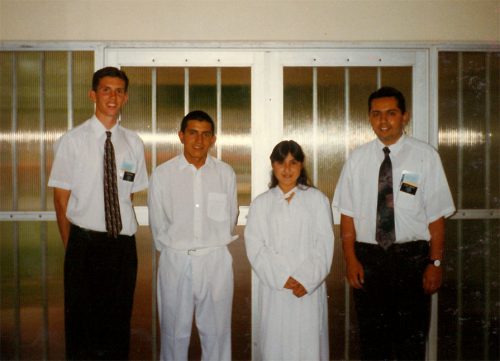 Four days after I arrived in the city of Condordia to serve in the Universidad Branch, we had the baptism of Maria Grillé on Feb 23, 1997. In the photo is me on the far left, then the brother performing the baptism is Ramón Dartuquí, then Maria, and then my companion, Elder Sanchez.  I don’t remember much about Maria because she had already been taught all the missionary discussions before I arrived. But I do remember visiting her modest home a few times and the fact that she was part of a large family. 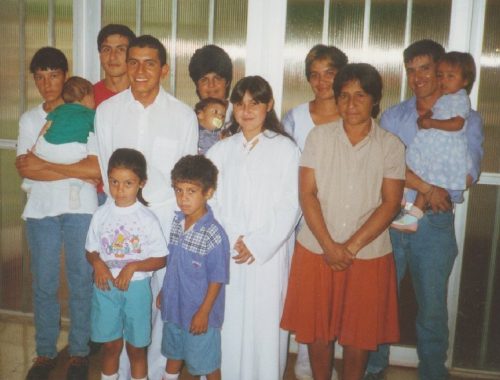 Here is Maria Grillé surrounded by much of her family on the day of her baptism. The baptism was held at an LDS Church owned building in the city, but that was not where the Universidad Brand met. In the picture are Maria’s mom Dolores, who was baptized two weeks earlier, her brothers, sisters-in-law, nieces, and nephews. 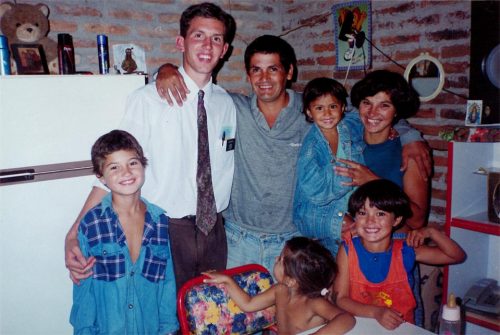 Here is the wonderful Lescano Family who I have previously written about and the miraculous way God guided us to them. I wish I had written down their names. I know Jorge is the father and Beatriz  is the mother, and I think the son is Jorge Jr. but I do’t remember the names of the daughters in the family. They were such a darling family. I still remember the discussions we had around their dining room table. 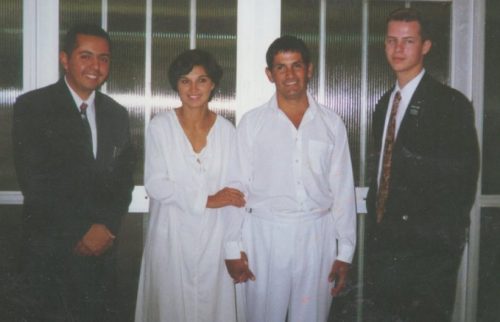 I was transferred after only two months in the city of Concordia and it just a week or two prior to the bastism of the Lescano family. My companion while I was in Concordia, Elder Sanchez, gave me this photo of their baptism. 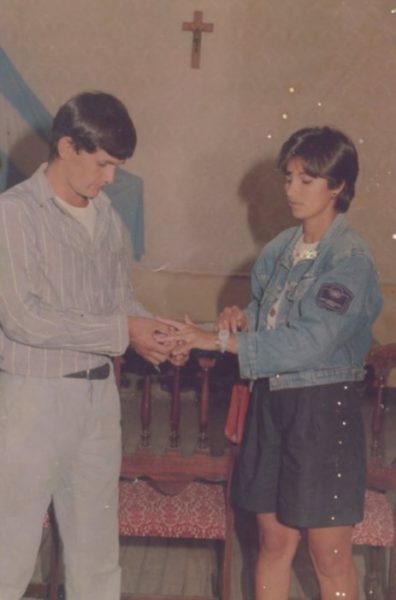 When I told Jorge Lescano that I was being transferred he got a little emotional. I too was sad to be leaving and not see their baptism. I was surprised when Jorge pulled out a photo album and gave me a picture of he and his wife Beatriz on their wedding day. He said he wanted me to keep it as a “recuerdo” (memento) and he even wrote his name and phone number on the back of the photo. I certainly will always remember him and his family. 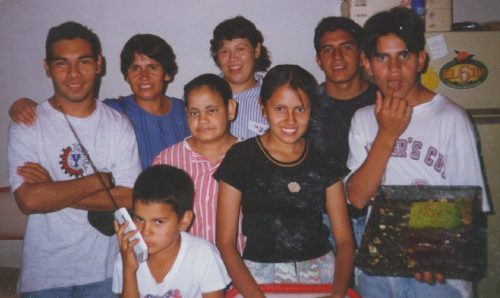 This is the Dartuquí family along with a couple of their friends. The Universidad branch was rather small so there weren’t a lot of families to feed the missionaries. But not to worry, the Dartuquí family stepped us and fed us lunch three times a week. I’m sure it was a sacrifice for them and I’m sure the Lord blessed them for it. If my memory serves me, the people in the photo are, left to right, Celestino, Sister Dartuquí, Esteban, Maria, Claudia, Sandra, Ramón, and Miguel. 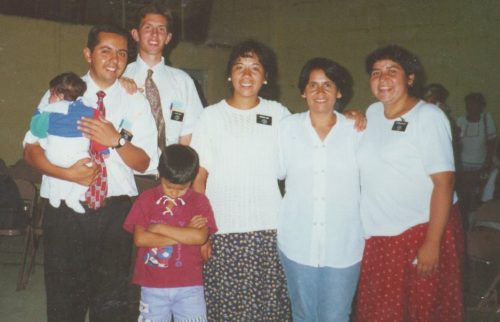 This picture was taken at the building that was rented for the Universidad Branch to meet in. The occasion was a branch Famil Home Evening activity. Pictured left to right are: an unknown baby, Elder Sanchez, myself, Esteban Dartuquí, the Sister Missionaries Jara and Salva, and Sister Dartuquí. 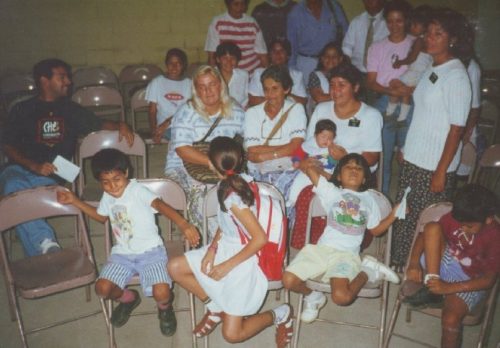 And here’s another picture from that same Family Home Evening activity. 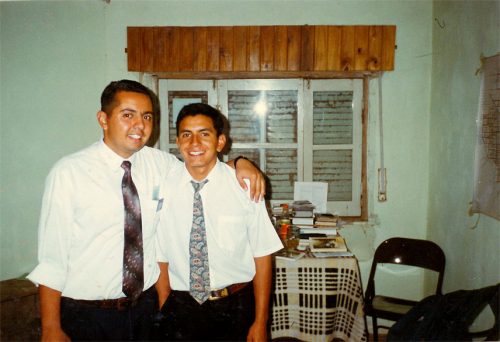 Here is my companion, Elder Sanchez, with Ramón Dartuquí. He must have come with us to an appointment. Or perhaps we were doing exchanges with the members. They are standing in our apartment in front of our study area. 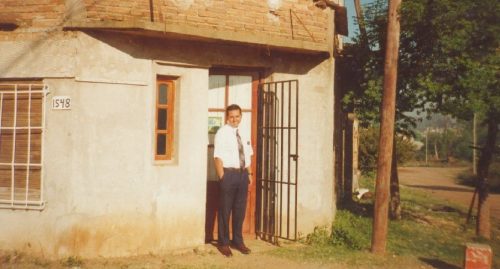 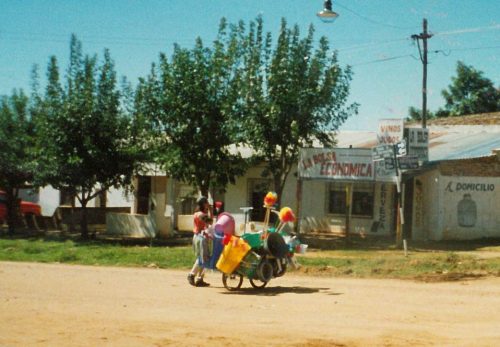 Here is a guy selling buckets, mops, and other household cleaning supplies. He simply walks down the street and shouts out what he is selling and people that are interested stop him to buy what they need. I thought it was an interesting aspect of Argentine culture, so I snapped a photo. 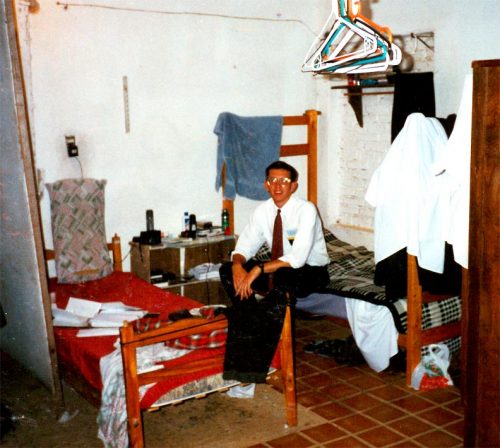 Here I am in our “pench” (short for pension which is Spanish for apartment). Mine is the first bed. I don’t remember being so sloppy and unorganized, and I apologize for not cleaning up a little before snapping this photo. Perhaps the picture was impromptu.

The Joy of Service
Scroll to top