Blog - Latest News
You are here: Home1 / Prepare with Honor 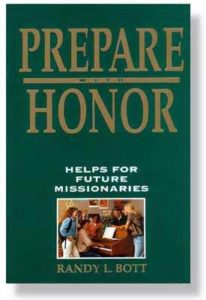 Prepare with Honor, Helps for Future Missionaries, is a great little book by BYU professor Randy L. Bott. Brother Bott served a mission to Samoa when he was young, and later in life, he was called to be a mission president in Fresno, California.  He has taught a missionary preparation class at BYU for many years, so he has a wealth of information and experience on the subject of mission preparation.

The book is just over 100 pages and will be an easy ready for any young person preparing for a mission.  Book topics include: 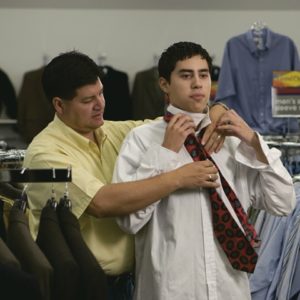 Despite parents and leaders encouraging young people to prepare in every way to serve a mission, according to Brother Bott, “too many young men and women seem to think all they have to do is show up and they will be prepared to serve.” (page 4)  “On the day each of them arrived…at this point new missionaries realize that more diligent preparation would have been helpful.” (page 1)  Comparing preparing for a mission to preparing to play football, Bro. Bott says, “what a shame it is to be unprepared when it’s your time to play.” (p. 6) Continuing he says, “preparation eliminates the fear of failure, and you are not called to fail.” (p.7)

Learn to Teach by Practicing Now

Brother Bott says that missionaries should start now to prepare to teach by learning the scriptures and practicing whenever they can such as in Sunday School, family home evening, or doing home teaching.  Bro. Bott says, “you will be more motivated to learn the scriptures and doctrines as you discuss sacred things with others.” (p.15)  He further encourages future missionaries, “Don’t ever turn down an opportunity to speak, because preparation forces us to learn.  Also, the challenge of teaching allows us to grow.” (p.18)

Keeping Yourself Worthy to Serve

Missionaries must keep themselves worthy and avoid sin because ”your sins make it impossible for the Spirit to teach you” or guide you in the work. (p.31) Brother Bott says that many future missionaries “have believed that could live whatever lifestyle…[then] change just before their mission…[but] habits are hard to break.” (p.55)  He urges futures missionaries to obey all the commandments and to especially avoid sexual sin because the most “serious sin that can disqualify you from fulfilling your…mission is immorality.” (p.31)  Brother Bott says that as a missionary, you must continually be an example of righteous living because many eyes will be on you and “you cannot choose whether or not to be a living testimony…[just] between being a good or bad example.” (p.72)

“Simply being away from home for two years [does not] constitute serving a mission.” (p.88) Brother Bott suggests that “faithful service will set the course for the rest of your life,” (p.75) and “a mission is either the best or the worst time of your life.  It all depends on you.” (p.77) He further encourages people at a young age to “make the definite decision that you will serve” (p.61) and if you do, when the time comes to go on a mission it will be easy because the decision will already be made. And reminding young people to serve with honor no matter where they are called to go, Brother Bott concludes by saying “the place doesn’t make a difference, but how you serve makes all the difference.” (p.104)

Now that I’m finished reading the book Prepare with Honor, I want to give it away to one of the young people reading this blog in preparation for their mission.  Is it lame to give away a used book?  I hope not because it’s really about all I can afford since I don’t have a budget for this site.  The book is in great condition; I didn’t mark any of the pages as I read it.  I’ll even pay for shipping, so all you have to do is enter, win and I’ll send you the book.  To enter, just leave a comment on the blog post answering this question: Who is your favorite missionary in the scriptures?

Rules: One entry per person. Entries will be received for at least 24 hours from the time this post is made, but may extend further. The winner will be selected at random.  I will announce the winner later this week.