Blog - Latest News
You are here: Home1 / The Saratov Approach 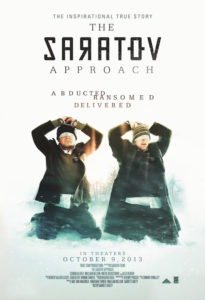 The Saratov Approach is a movie about two Mormon missionaries who were kidnapped in Russia in 1998. I found this to be an excellent movie, well made, entertaining, and very spiritually uplifting. I loved the way it showed the Christian community across the country come together to pray for these two young men who were in peril. I appreciated how the movie taught important lessons about listening to the still, small voice of the Holy Spirit, Christ-like love and mercy, and faith God.

The movie depicts the kidnapping of missionaries Andrew Lee Propst and Travis Robert Tuttle in Saratov, Russia. The kidnappers demanded $300,000 in ransom for the safe return of the missionaries, but neither The Church, the families, nor the US government would pay it. The missionaries were held for 5 days before the kidnappers finally, miraculously released them relatively unharmed (some bumps and bruises and a scary experience they will likely never forget).

The Effect on Future Missionaries and Their Parents

With the ever increasing number of LDS missionaries serving, I was initially concerned about possible negative effects this film might have on future missionaries and their families. But upon seeing the movie, I don’t have that fear any longer. The story is faith promoting and only increases my desire, and likely anyone else seeing it, to do missionary work and build the kingdom of God. Garrett Batty, the director and writer of The Saratov Approach, reports a similar reaction by most viewers.

“What we have found is the moms … all have those feelings going into it. [But] every one of them comes out of the film with tears in their eyes and they say, ‘Thank you for that.’ This film renews faith that these missionaries are on the Lord’s errands. It has almost been a tribute to the missionary moms. The amount of faith for a mother to send her son or daughter on a mission is immeasurable, and this movie recognizes that.” (See ‘The Saratov Approach’ director planned for movie 15 years ago on Utahvalley360.com)

Below are three of my favorite parts of the movie, scenes that were powerful, emotional, edifying, and spiritually uplifting.

Towards the end of the film, the two missionaries, handcuffed to a filthy bed, are talking with one of their captors, Nikolai. Nikolai explains how he wants to let them go, but he is afraid that the other captor, Sergei, will shoot him if he did. The missionaries, in one sense, were at the lowest of low points: kidnapped, beaten, threatened with death, handcuffed in cold, filthy conditions. Yet in this instance there is a feeling of freedom and exaltation for the missionaries, as the film contrasts them to the trap Sergei and Nikolai have gotten themselves into due to their circumstances and poor choices. It was then that the story of Alma and Amulek in a prison in the land of Ammonihah (Alma chapter 14) came to my mind. 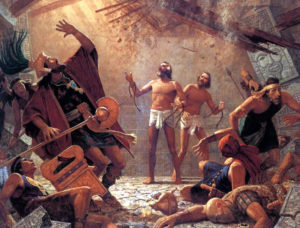 “And they did withhold food from them that they might hunger, and water that they might thirst; and they also did take from them their clothes that they were naked; and thus they were bound with strong cords, and confined in prison. And it came to pass that they all went forth and smote them, saying the same words, even until the last; and when the last had spoken unto them the power of God was upon Alma and Amulek, and they rose and stood upon their feet. And Alma cried, saying: How long shall we suffer these great afflictions, O Lord? O Lord, give us strength according to our faith which is in Christ, even unto deliverance. And they broke the cords with which they were bound; and when the people saw this, they began to flee, for the fear of destruction had come upon them….and the earth shook mightily, and the walls of the prison were rent in twain, so that they fell to the earth; and the chief judge, and the lawyers, and priests, and teachers, who smote upon Alma and Amulek, were slain by the fall thereof. And Alma and Amulek came forth out of the prison, and they were not hurt; for the Lord had granted unto them power, according to their faith which was in Christ.” (Alma 14: 22, 25-28)

Elder Tuttle Bearing His Testimony of the Savior

There was a very touching moment, about mid-way through the film, where the two missionaries asked each other why they decided to serve a mission. Elder Probst told how he always knew he wanted to serve a mission and from a very early age was doing everything he could to earn money and save it for his mission.

Elder Tuttle then explains how growing up he did not want to serve a mission. But a good priesthood leader brought him to a mission prep class where he was touched by the Spirit of the Lord. The class had a discussion on the Atonement of Jesus Christ and Elder Tuttle learned about how Jesus wished he didn’t have to drink from the bitter cup (the infinite suffering). Yet even more powerful, though, was the Savior’s desire to do his father’s and so he went ahead and paid the eternal price for our sins. Elder Tuttle then bears a powerful testimony of how he gained the desire to follow the Savior and do the will of his Father in Heaven and serve a mission.

Call from Another Missionary who had been kidnapped

Perhaps the most touching part of the movie for me was when the father of one of the kidnapped missionaries received a call from a man who had been kidnapped as a missionary in Argentina 20 years earlier. His words brought great comfort to the parents. He said that the longer their sons were with the kidnappers, the more likely it was that they would come home safely because, he testified, “light always overcomes darkness.” 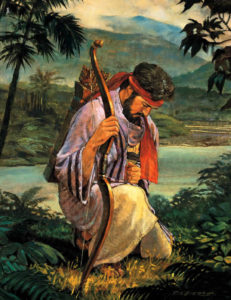 The man who had been kidnapped as a missionary in Argentina further explained to the parents what was going through the minds of their sons. He explained how they were doing a lot of praying, not for themselves, but for others. He said they will not be thinking about their own welfare, but rather they will be praying that their parents, family and friends will be comforted. He said then, almost involuntarily, they will begin to pray for their captors. He said Christ-like love and mercy will pour over them and they will desire that their captors, who are spiritually lost and suffering, will be blessed by God.

At this point in the movie, the Book of Mormon prophet Enos came to my mind. Enos, while engaged in “mighty prayer,” prayed first for himself and then for his family and friends, and then his heart was turned to his enemies and he prayed for them: “Now, it came to pass that when I (Enos) had heard these words I began to feel a desire for the welfare of my brethren, the Nephites; wherefore, I did pour out my whole soul unto God for them. …And after I, Enos, had heard these words, my faith began to be unshaken in the Lord; and I prayed unto him with many long strugglings for my brethren, the Lamanites.” (Enos 1: 9, 11)

The Colors of Christmas in Fiji

Fearless in Practicing Your Language
Scroll to top