Blog - Latest News
You are here: Home1 / Mission Bikes: What Type to Choose, Mountain or Urban? 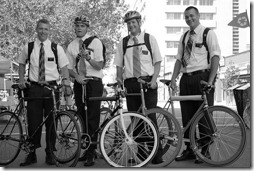 A marathon is a 26.2 mile endurance race and similarly a mission is an endurance event. Read any guide on preparing for a marathon and you will find within the top ten suggestions: do not use anything new on race day! Many would be marathoners have failed because of a new shirt chafing or new shoes causing blisters with each step. Similarly many new missionaries are spiritually well prepared, but physically miserable because they are using new equipment, their mission bike, in a very physical event.

Accomplishing your mission of inviting others to come unto Christ requires that you first go to the people so you can invite them. Crossing continents or oceans to get to your country is easy – buy a ticket. However, getting around in the country is often the challenge. This is the first of a series of articles will help you be prepared to effectively use one of the most common missionary tools: the bicycle. Hopefully you will then be able to avoid the chafing and blistering that too frequently occur when new missionaries meet new tools.

Getting around on a bike is fun and should be. There are many different styles of bikes but a general division of mountain and urban makes for a good comparison. Which type of bike is really best for missionary work?

Interestingly bike messengers have led to a revolution of sorts in bike usage. Their bike needs — transportation, reliability and simplicity — have typically led them to single speed, urban bikes. The urban bikes have narrower tires and solid frames. These make them faster on city streets because of less rolling resistance and weight. A fringe benefit is they have fewer parts to buy and repair. Missionaries need the same things bike messengers need: transportation, reliability and simplicity. While you shouldn’t jump an urban bike off a cliff, it still provides fast and durable city transportation.

Either bike type will work for getting a missionary around town. And yes, the mountain bike will be more suited to “p-day activities”. However, since most missionaries are based in urban settings, the urban bike will be provide reliable, easy to ride, simple transportation for daily mission work.

Bike Tires and How to Fix Flat Tires
Scroll to top