Blog - Latest News
You are here: Home1 / Don’t Be a Trunky Missionary, Endure to the End

I was recently reading in my missionary journal about my last week in Rosario Argentina back in November 1997. I thought I’d share some of the events of that week, and (hopefully I’m not boasting here) talk about how I worked diligently until the very end of my mission. I encourage all of you future missionaries to work hard up until the very end of your mission and resist the temptation to get “trunky” or distracted from the very important full-time missionary work you have been commissioned to do. (“Trunky” is a reference to trunks or luggage of someone who is eager to leave and go home.) 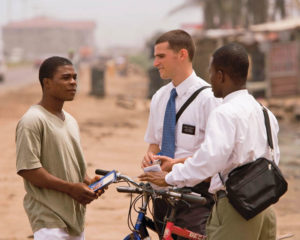 During the last full week of my mission, my companion and I taught three second discussions, during which we invited three families to get baptized. This was quite the momentous week because it was the only week in my mission where we made three baptismal invitations. Two of the families said yes and we set baptismal dates for them. The other family said they’d think and pray about it some more. It was very spiritually uplifting to teach these families and make plans to help them come unto Christ by entering the gate to the straight and narrow path through the waters of baptism. We had found all three of these families earlier in the month by simply working hard, following the Spirit, and opening our mouth.

Another event that happened the last week of my mission is one that I will never forget. My companion and I were serving as zone leaders and there was a companionship in our zone that was having difficulties. I don’t recall exactly what the problem was, but I don’t think the Elders were getting along with one another, and the missionary work was not going very well in there area. We decided to do exchanges with this troubled companionship; one of them came to our area, and I went with the other one to his area to work for the day.

When my temporary companion for the day and I sat down to make our plans, I asked if they had any appointments already set. He said that they did not–not for the day, not for the week. I next asked if they had any investigators who they were currently working with. Again, the answer was no. As I probed further, it turned out that they spent most of their days visiting members, going from one house to another doing little more than killing time. I told him this was not the most wise use of a missionary’s time, and that we would be spending our day together out on the street, contacting, and finding new people to teach. I was going to teach this relatively young missionary how to work.

We spent the entire day on the streets of Rosario, Argentina talking to everyone we saw. We easily spoke to 100 people during the day, and we testified to each one of them that we were true messengers of the Lord Jesus Christ. It was a long, hot, tiring day. We only took a little break for lunch, and one other break when we happened to walk by a member’s house and they invited us inside for a quick drink of water.  At the end of the day we had more then 10 appointments for first discussions that this Elder and his companion would be teaching over the next week.

A couple months after I returned home, I received word that at least one of the men we had talked to on that fateful day had been baptized into the Lord’s true church. It gave me great satisfaction to know that that person had received the testimony of the missionaries, been touched by the Spirit, and exercised his faith and followed Christ into the waters of baptism for this vital, saving ordinance. It also gave me great satisfaction to know that I worked hard up until the very end of my mission and never got “trunky.” I didn’t let opportunities go by to open my mouth, share the restored gospel, and bring the blessings of salvation unto as many people as possible. I pray that each one of you will decide now never to be a trunky missionary, and to carry with you throughout your mission a desire to work hard. Make the most out of every day and endure to the end of your mission, continually teaching and testifying of our Savior Jesus Christ and this important latter-day work.