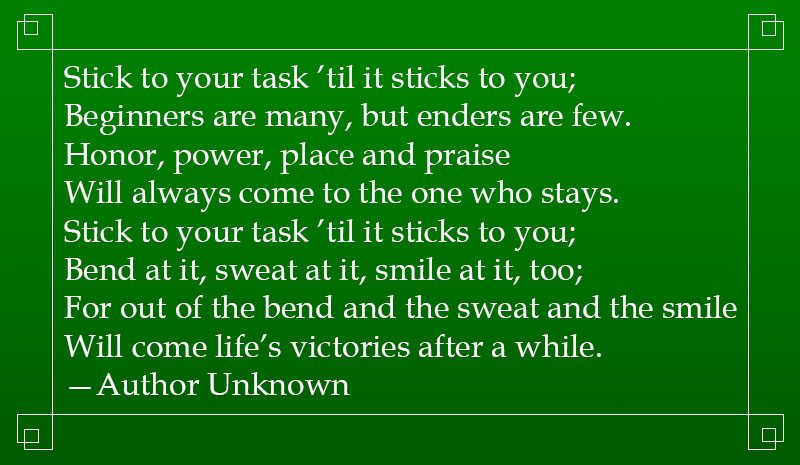 In 1972, President Thomas S. Monson delivered his classic talk entitled, Finishers Wanted. In that talk, he quoted this famous poem:

The first two lines of the poem are ones I quote to my children often in regards to chores, school assignments, and other activities. These concepts are also very applicable and important to full-time missionaries.

When I had been in Argentina on my mission for about four months, I remember getting really discouraged one day. I had thoughts of giving up and going home. I was frustrated with the lack of progress in speaking and understanding the Spanish language. I was home sick and longed for the freedom to do the things I wanted to do, as opposed to the very regimented and repetitious daily schedule missionaries follow. And Satan was probably throwing many other doubts into my mind. Thankfully, I snapped out of it by throwing myself more into the work and relying more on the graces of my Lord and Savior Jesus Christ.

Overall, missionary work is enjoyable, satisfying, and even fun at times. But it is also work, hard work. And it can be tiresome and discouraging at times. For missionaries to endure to the end of their missions and return home with honor, they will need the discipline and fortitude President Monson spoke about when he said that finishers are wanted in this Church. Here’s his story:

“I paused before the elegant show window of a prestigious furniture store. That which caught and held my attention was not the beautifully designed sofa nor the comfortable-appearing chair that stood at its side. Neither was it the beautiful chandelier positioned overhead. Rather, my eyes rested upon a small sign that had been placed at the bottom right-hand corner of the window. Its message was brief: “Finishers Wanted.”

The store had need of those persons who possessed the talent and the skill to make ready for final sale the expensive furniture that the firm manufactured and sold. “Finishers Wanted.” The words remained with me as I returned to the pressing activities of the day.

In life, as in business, there has always been a need for those persons who could be called finishers. Their ranks are few, their opportunities many, their contributions great.

From the very beginning to the present time, a fundamental question remains to be answered by each who runs the race of life. Shall I falter or shall I finish? On the answer await the blessings of joy and happiness here in mortality and eternal life in the world to come. …we sympathize with those who falter. We honor those who finish.”

President Monson goes on, in his talk, to highlight the Old Testament prophet Job, who did not falter under intense trials and persecution. Job became a finisher. He mentions the New Testament Apostle Paul, who at the conclusion of his ministry said: “I have fought a good fight, I have finished my course, I have kept the faith.” (2 Tim. 4:7.) Like Job, Paul was a finisher. Then, ultimately, he brings up the example of our Savior Jesus Christ. Says President Monson, “though Jesus was tempted by the evil one, yet he resisted. Though he was hated, yet he loved. Though he was betrayed, yet he triumphed.” At the end of his mortal life, Jesus prayed to the Father, “I have glorified thee on the earth: I have finished the work which thou gavest me to do.” (John 17: 4.)

In his Finishers Wanted talk, President Monson addresses specifically the subject of a missionary who wanted to leave the mission field and go home early. It happened when he was serving as a mission president in Canada. Here is the story:

“[A missionary] came to me in utter despair. He had made his decision to leave the mission field when but at the halfway mark. His bags were packed, his return ticket purchased. He came by to bid me farewell. We talked; we listened; we prayed. There remained hidden the actual reason for his decision to quit.

As we arose from our knees in the quiet of my office, the missionary began to weep. Flexing the muscle in his strong right arm, he blurted out, “This is my problem. All through school my muscle power qualified me for honors in football and track, but my mental power was neglected. President Monson, I’m ashamed of my school record. It reveals that ‘with effort’ I have the capacity to read at but the level of the fourth grade. I can’t even read the Book of Mormon. How then can I understand its contents and teach others its truths?”

The silence of the room was broken by my young nine-year-old son, who, without knocking, opened the door and, with surprise, apologetically said, “Excuse me. I just wanted to put this book back on the shelf.”

He handed me the book. Its title: A Child’s Story of the Book of Mormon, by Dr. Deta P. Neeley. I turned to the foreword and read these words: “This book has been written with a scientifically controlled vocabulary to the level of the fourth grade.” A sincere prayer from an honest heart had been dramatically answered.

My missionary accepted the challenge to read the book. Half laughing, half crying, he declared, “It will be good to read something I can understand.” Clouds of despair were dispelled by the sunshine of hope. He completed an honorable mission. He became a finisher.

…I pray humbly that each one of us may be a finisher in the race of life and thus qualify for that precious prize: eternal life with our Heavenly Father in the celestial kingdom. I testify that God lives, that this is his work, and ask that each may follow the example of his Son, a true finisher.”

May the missionaries of today and tomorrow follow the example of the the prophets of old who endured enormous trials and tribulations and endured with faith to the end. And most especially, let us rely on the power of the Savior, and His Atonement, follow his example and finish the work God has called us to do. “Missionary work is difficult. It will tax your energies. It will strain your capacity. It will demand your best effort—frequently, a second effort. Remember, the race goeth “not to the swift, nor the battle to the strong” (Eccl. 9:11)—but to him who endures to the end. Determine to— Stick to your task till it sticks to you.” – President Monson, The Army of the Lord, April 1979. 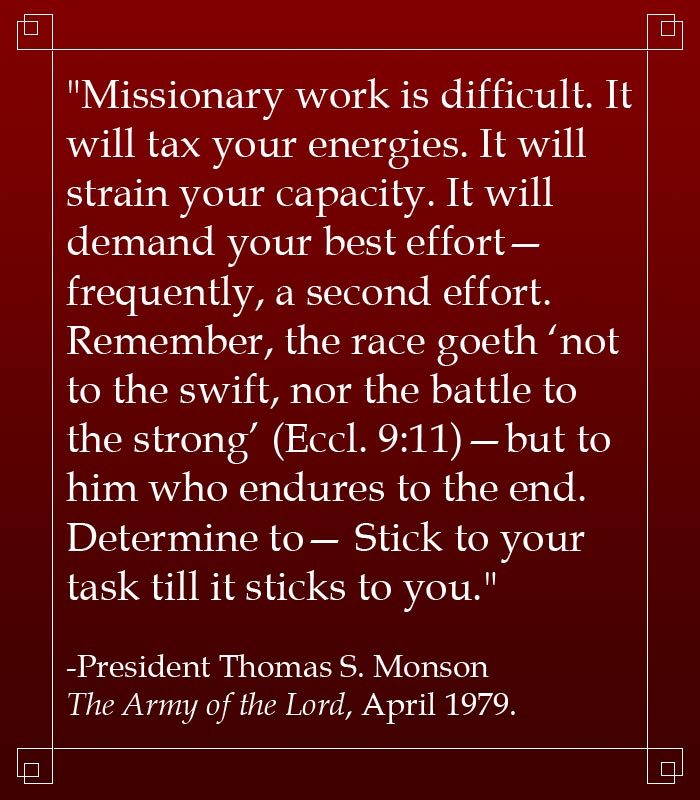