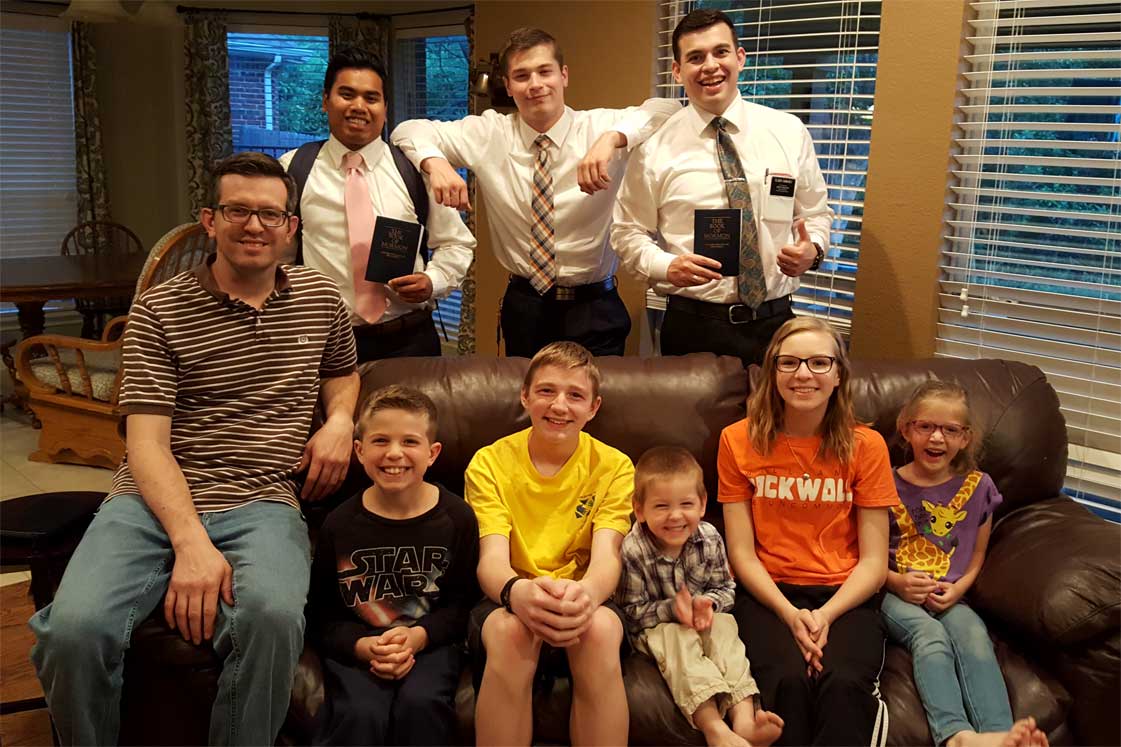 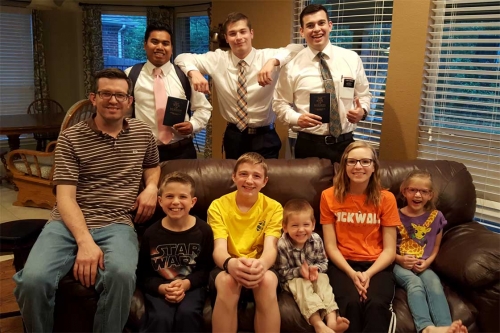 About a month ago, I believe it was the first Sunday in May, I was sitting with my family in fast and testimony meeting. The two full-time missionaries, both relatively newly assigned to our ward, each went to the pulpit, introduced himself, and bore his testimony. First was Elder Justin Sanchez and he told about how his family was from Honduras and that he grew up in rather poor circumstances, often living in double-wide trailers and generally wearing hand-me-down clothes. While they were poor as to worldly belongings, he said, they were rich in the blessings of the gospel of Jesus Christ.

In his testimony, Elder Sanchez mentioned that he was older than most missionaries—he was 25 years old. He went on to bare a nice testimony of the restored gospel, and as he spoke, I felt inspired to invite him to our home to talk to our children in more detail and give more of his background story and testimony. I felt my children, who are good kids that we try not to spoil, are nevertheless, accustomed to a rather comfortable life in many ways, especially when compared to many other people in the world. I felt my kids could benefit from hearing Elder Sanchez’s humble life story and perspective.

After the meeting, I asked him if he could come present a family home evening lesson to our family one night in the coming week and he agreed. Upon hearing his more detailed life story, I also thought it would be of great benefit to the audience of this website to see his perseverance in preparing for and fulfilling a full-time mission for the Lord. With Elder Sanchez’s permission, I now share his story.

Elder Sanchez’s maternal grandfather was a member of the LDS Church, but he was inactive, and therefore, his mother did not grow up in the Church. At some point during his mom’s adult married life, but before Elder Sanchez was born, their family met the Mormon missionaries and joined the Church. When Elder Sanchez’s mom was pregnant with him, she received a spiritual prompting that there would be complications with his birth. Their family was poor and did not have health insurance. So, the family decided to go to Honduras, where Elder Sanchez’s father was from, to have the baby there because the family would have good medical coverage.

Elder Sanchez’s mother’s spiritual premonition and inspiration turned out to be right—he had the umbilical cord wrapped around his neck three times and he ended up being safely delivered via C-section. The family felt his safe birth was a miracle and that he would have been still born had they stayed in the United States for the birth. While his family moved back to the US soon after his birth, they soon did relocate to Honduras.

Elder Sanchez’s family, financially, was not doing very well in the US, but his father’s family owned some land in Honduras that they offered to him to use as a homestead and farm. The family decided to go for it, and so Elder Sanchez’s parents and all his brothers and sisters moved to Honduras. On the first night there, they all slept on a single mattress in one room. But soon their situation improved and they ended up with a nice home and circumstances. All the siblings helped on the farm where they grew pineapples, mangoes, corn, and peanuts.

It was fall of 1998 and on October 26, Hurricane Mitch was in the Caribbean Sea and had become a category 5 hurricane. It made landfall in Honduras a few days later, on October 29. Some parts of Honduras reported three feet of rainfall from the storm and the hurricane produced ocean waves estimated to be 44 feet in height. The rainfall also caused widespread mudslides across the mountainous areas of the country. An estimated 70 to 80% of the country’s transportation network was destroyed, including most bridges and roads. Crops and agricultural livestock damage was valued in the billions. All told, the storm caused 7,000 deaths in Honduras and cost the people of that country $3.8 billion in damage (see https://en.wikipedia.org/wiki/Hurricane_Mitch). The Sanchez family was safe from the storm, but their farm was wiped out and so they packed up once again and moved back to the United States. 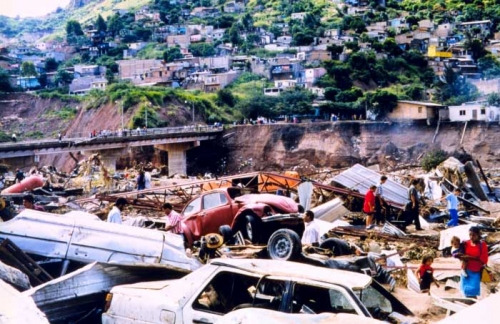 A Mission Call and Difficulties at the MTC

The Sanchez family eventually settled in the state of Oregon, and though they continued to struggle financially, they were active in the gospel. Elder Sanchez had some of his older siblings serve missions, which was a great example to him. After he finished high school, he worked for a while to earn and save money for his mission and then at age 20, Elder Sanchez received a mission call to Billings Montana.

In the Missionary Training Center (MTC), his thoughts frequently turned to the difficult financial situation of his family back home.  His family counseled him not to worry about their needs and to focus on his mission, but it was difficult. Elder Sanchez says that, at this time, he also began to struggle somewhat with his personal testimony of the restored gospel of Jesus Christ. He said that throughout his life, he had leaned on the testimony of his parents and siblings, but now he realized he needed to know for himself if he believed the things that he would be teaching as a missionary. That, together with the personal struggles of challenges back home, made it difficult for Elder Sanchez to feel the Spirit of God while at the MTC.

After three weeks in the MTC, in counseling with the MTC president, the difficult decision was made that Elder Sanchez should return home and come back to the mission when he was more ready. Upon returning home, he knew his family loved and supported him, but he felt misjudged by the other members of his ward. He stopped attending church meetings as regularly as he should have, and while he never went inactive, it was a couple of years later before he became fully engaged with the church again.

Elder Sanchez didn’t go into detail about what led him back, but he said that certain circumstances led him back to full participation in the gospel and the Church. At this time in his life, he wanted to make the efforts necessary to find out for himself if the gospel and The Church of Jesus Christ of Latter-day Saints was true. He attended his church meetings, read the scriptures and prayed, and began to feel the Spirit of God working in his life. He knew he had felt the Spirit confirm the truthfulness of the gospel and he prayed to know what God wanted him to do with his life. He wanted to improve himself and the prospects for his future and when he prayed, he felt like he should look into going back into the mission field. He asked his bishop about it and soon he received a new mission call, this time to the Dallas Texas mission.

So at age 24, Elder Sanchez began anew his full-time missionary service. He said it was difficult coming into the mission field when he was considerably older than most the other new missionaries, who are generally 18 or 19 years old, but he’s glad he did it. I can imagine it took a great amount of faith, dedication, and humility to return to the mission force, but we too are glad he did it and that we have gotten to know him.

Lessons Learned through Service and Adversity

Elder Sanchez said that before his mission he had many challenges, but the mission has helped him to lose himself in the service of others. Prior to his mission, he spent his life concerned about his own trials, but the mission has been just the opposite, he says, you concern yourself with others and their well-being. He learned the lesson President Hinckley taught when he said: “Why are missionaries happy? Because they lose themselves in the service of others” (Chapter 14: Teachings of Presidents of the Church: Gordon B. Hinckley). Or as the Savior taught: “Whosoever will save his life shall lose it; but whosoever shall lose his life for my sake and the gospel’s, the same shall save it” (Mark 8:35).

Elder Sanchez additionally said that he has found that because of his struggles in life, he has been able to relate to others he has met on his mission and the challenges they  have. He has found that facing and overcoming adversity is an experience that connects us and that Jesus Christ in particular, who suffered more than all of us with his infinite atoning sacrifice, is the common connection between everyone’s life. Elder Sanchez has found that when we realize the love Heavenly Father has for us in sending His Son, that we can receive hope and courage to conquer all of our challenges.

My family and I were very grateful that Elder Sanchez came over and shared his story with us and that he is allowing us to sharing it now with the Mormon Mission Prep community. His strong faith and testimony is clear and we know the Lord has blessed him and will continue to watch over him and his family. We’re thankful that the Lord assigned him to our ward so that we could get to know him and we pray for the choicest blessings to attend him the remainder of his mission and throughout his life.