Young Women in the Work by Bonnie L. Oscarson

“As we consider the roles that our young women will be expected to assume in the near future, we might ask ourselves what kind of experiences we could provide for them now that will help with their preparation to be missionaries, gospel scholars, leaders in the Church auxiliaries, temple workers, wives, mothers, mentors, examples, and friends. They can actually begin now to fill many of those roles.” 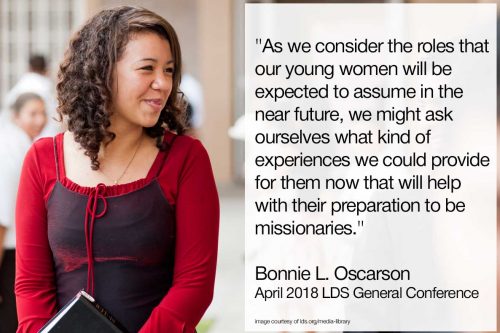 Teaching in the Home—a Joyful and Sacred Responsibility by Devin G. Durrant

“As parents, we introduce our children to Heavenly Father and His Son, Jesus Christ. We help our children say their first prayer. We offer guidance and support as they enter the covenant path through baptism. We teach them to obey God’s commandments. We educate them about His plan for His children, and we help them recognize the whisperings of the Holy Ghost. We tell them stories of ancient prophets and encourage them to follow living ones. We pray for their triumphs and ache with them during their trials. We testify to our children of temple blessings, and we strive to prepare them well to serve full-time missions.”

What Every Aaronic Priesthood Holder Needs to Understand by Douglas D. Holmes

“When I was a new mission president, I was excited to receive our first group of new missionaries. A few of our more experienced missionaries were preparing for a brief meeting with them. I noticed that they had arranged children’s chairs in a semicircle. “What’s up with the little chairs?” I asked. The missionaries, somewhat sheepishly, said, “For the new missionaries.” I believe the way we see others significantly impacts their perception of who they are and what they can become. Our new missionaries sat on adult chairs that day.”

“…In much the same way that angels are authorized messengers sent by God to declare His word and thereby build faith, we who hold the Aaronic Priesthood have been ordained to “teach, and invite all to come unto Christ.” To preach the gospel is a priesthood duty. And the power associated with this duty is not just for prophets or even just for missionaries. It is for you!” 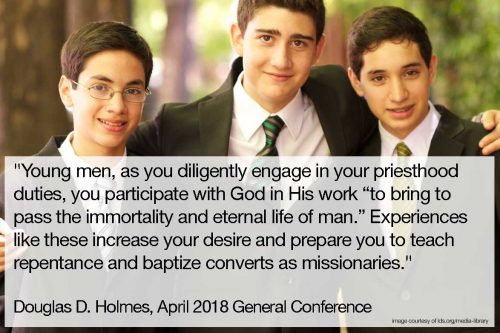 “…Young men, as you diligently engage in your priesthood duties, you participate with God in His work “to bring to pass the immortality and eternal life of man.” Experiences like these increase your desire and prepare you to teach repentance and baptize converts as missionaries.”

“…Parents and priesthood leaders, can you sense the importance of President Monson’s counsel to help young men understand “what it means … to be bearers of the priesthood of God”? Understanding and magnifying the Aaronic Priesthood will prepare them to be faithful Melchizedek Priesthood holders, power-filled missionaries, and righteous husbands and fathers. Through their service, they will understand and feel the reality of priesthood power, the power to act in the name of Christ for the salvation of God’s children.”

“There is a third important lesson in Ensign Blair’s story. Could he have prayed with such calm assurance if he had not received guidance from the Spirit on previous occasions? The arrival of a typhoon is no time to dust off the gift of the Holy Ghost and figure out how to use it. This young man was clearly following a pattern he had used many times before, including as a full-time missionary. We need the Holy Spirit as our guide in calm waters so His voice will be unmistakable to us in the fiercest storm.”

“Eighteen years ago, my wife and I received a phone call from President James E. Faust, then Second Counselor in the First Presidency. He called us to serve as mission president and companion in Portugal. He told us that we had only six weeks before we started the mission. Although we felt unprepared and inadequate, we accepted the call. Our most important concern at the time was to obtain the visas required to serve in that country because, according to past experience, we knew the process took six to eight months to complete.

President Faust then asked if we had faith that the Lord would perform a miracle and that we would be able to solve the visa problem faster. Our answer was a big yes, and we started making the arrangements immediately. We prepared the documents required for the visas, took our three young children, and went to the consulate as fast as we could. A very nice lady met with us there. In reviewing our papers and getting acquainted with what we were going to do in Portugal, she turned to us and asked, “Are you really going to help the people of my country?” We firmly answered yes and explained that we would represent Jesus Christ and testify of Him and His divine mission in the world. We returned there four weeks later, received our visas, and landed in the mission field within the six weeks, as a prophet of the Lord had asked us to do.”

“Today almost 70,000 missionaries are spread across the earth preaching His gospel to gather His elect. This is the commencement of the fulfillment of the great and marvelous work Nephi foresaw among both the Gentiles and the house of Israel. Nephi saw our time when the Saints of God would be upon all the face of the earth, but their numbers would be small because of wickedness. However, he foresaw that they would be “armed with righteousness and with the power of God in great glory.” When viewed across the brief history of the restored Church, the missionary effort has been most remarkable. We are seeing the fulfillment of Nephi’s vision. Though our numbers are relatively few, we will continue our effort and outreach to those who will respond to the Savior’s message.”

“…Missionaries humbly serve where called. They do not attempt to serve based on worldly standards of status or preparation for future careers. They serve with all their heart, might, mind, and strength wherever they are assigned. They do not choose their missionary companions, and they seek diligently to develop Christlike attributes,29 which are at the heart of the culture of Jesus Christ.”