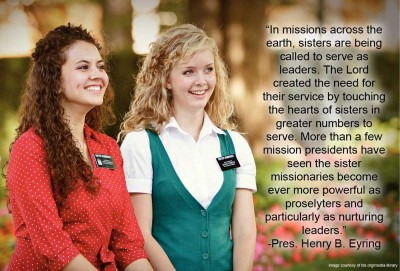 Daughters in the Covenant – President Henry B. Eyring

In missions across the earth, sisters are being called to serve as leaders. The Lord created the need for their service by touching the hearts of sisters in greater numbers to serve. More than a few mission presidents have seen the sister missionaries become ever more powerful as proselyters and particularly as nurturing leaders.

With admiration and encouragement for everyone who will need to remain steadfast in these latter days, I say to all and especially the youth of the Church that if you haven’t already, you will one day find yourself called upon to defend your faith or perhaps even endure some personal abuse simply because you are a member of The Church of Jesus Christ of Latter-day Saints. Such moments will require both courage and courtesy on your part.

For example, a sister missionary recently wrote to me: “My companion and I saw a man sitting on a bench in the town square eating his lunch. As we drew near, he looked up and saw our missionary name tags. With a terrible look in his eye, he jumped up and raised his hand to hit me. I ducked just in time, only to have him spit his food all over me and start swearing the most horrible things at us. We walked away saying nothing. I tried to wipe the food off of my face, only to feel a clump of mashed potato hit me in the back of the head. Sometimes it is hard being a missionary because right then I wanted to go back, grab that little man, and say, ‘EXCUSE ME!’ But I didn’t.”

To this devoted missionary I say, dear child, you have in your own humble way stepped into a circle of very distinguished women and men who have, as the Book of Mormon prophet Jacob said, “view[ed Christ’s] death, and suffer[ed] his cross and [borne] the shame of the world.”

In keeping with the Savior’s own experience, there has been a long history of rejection and a painfully high price paid by prophets and apostles, missionaries and members in every generation—all those who have tried to honor God’s call to lift the human family to “a more excellent way.”

A Priceless Heritage of Hope – Pres. Henry B. Eyring

I owe much of my happiness in life to a man I never met in mortal life. He was an orphan who became one of my great-grandparents. He left me a priceless heritage of hope. Let me tell you some of the part he played in creating that inheritance for me. His name was Heinrich Eyring…

It was that Spirit that sustained him on the mission to which he was called only a few months after accepting the baptismal covenant. He left as his heritage his example of staying faithful to his mission for six years in what was then called the Indian Territories. To receive his release from his mission, he walked from Oklahoma to Salt Lake City, a distance of approximately 1,100 miles (1,770 km).

Soon thereafter he was called by the prophet of God to move to southern Utah. From there he answered another call to serve a mission in his native Germany. He then accepted the invitation of an Apostle of the Lord Jesus Christ to help build up the Latter-day Saint colonies in northern Mexico. From there he was called to Mexico City as a full-time missionary again. He honored those calls. He lies buried in a small cemetery in Colonia Juárez, Chihuahua, Mexico.

I recite these facts not to claim greatness for him or for what he did or for his descendants. I recite those facts to honor him for the example of faith and hope that was in his heart.

I Have Given You an Example – Richard G. Scott 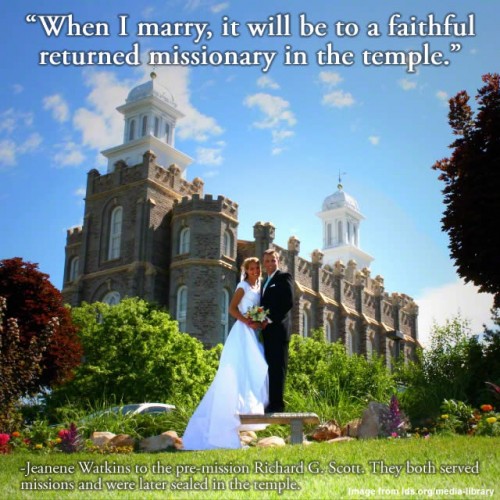 As I was about to graduate from the university, I fell in love with a beautiful young woman named Jeanene Watkins. I thought she was beginning to have some deep feelings for me also. One night when we were talking about the future, she carefully wove into the discussion a statement that changed my life forever. She said, “When I marry, it will be to a faithful returned missionary in the temple.”

I hadn’t thought much about a mission before then. That night my motivation to consider missionary service changed dramatically. I went home, and I could think of nothing else. I was awake all night long. I was completely distracted from my studies the next day. After many prayers I made the decision to meet with my bishop and begin my missionary application.

Jeanene never asked me to serve a mission for her. She loved me enough to share her conviction and then gave me the opportunity to work out the direction of my own life. We both served missions and later were sealed in the temple. Jeanene’s courage and commitment to her faith have made all the difference in our lives together. I am certain we would not have found the happiness we enjoy without her strong faith in the principle of serving the Lord first. She is a wonderful, righteous example!

The Keys and Authority of the Priesthood – Dallin H. Oaks

We are not accustomed to speaking of women having the authority of the priesthood in their Church callings, but what other authority can it be? When a woman—young or old—is set apart to preach the gospel as a full-time missionary, she is given priesthood authority to perform a priesthood function. The same is true when a woman is set apart to function as an officer or teacher in a Church organization under the direction of one who holds the keys of the priesthood. Whoever functions in an office or calling received from one who holds priesthood keys exercises priesthood authority in performing her or his assigned duties.

If you think your challenges are insurmountable, let me tell you of a man we met in a small village outside of Hyderabad, India, in 2006. This man exemplified a willingness to change. Appa Rao Nulu was born in rural India. When he was three years old, he contracted polio and was left physically disabled. His society taught him that his potential was severely limited. However, as a young adult he met our missionaries. They taught him of a greater potential, both in this life and in the eternity to come. He was baptized and confirmed a member of the Church. With a significantly raised vision, he set a goal to receive the Melchizedek Priesthood and to serve a full-time mission. In 1986 he was ordained an elder and called to serve in India. Walking was not easy—he did his best, using a cane in each hand, and he fell often—but quitting was never an option. He made a commitment to honorably and devotedly serve a mission, and he did.

When we met Brother Nulu, nearly 20 years after his mission, he cheerfully greeted us where the road ended and led us down an uneven dirt path to the two-room home he shared with his wife and three children. It was an extremely hot and uncomfortable day. He still walked with great difficulty, but there was no self-pity. Through personal diligence, he has become a teacher, providing schooling for the village children. When we entered his modest house, he immediately took me to a corner and pulled out a box that contained his most important possessions. He wanted me to see a piece of paper. It read, “With good wishes and blessings to Elder Nulu, a courageous and happy missionary; [dated] June 25, 1987; [signed] Boyd K. Packer.” On that occasion, when then-Elder Packer visited India and spoke to a group of missionaries, he affirmed to Elder Nulu his potential. In essence, what Brother Nulu was telling me that day in 2006 was that the gospel had changed him—permanently! 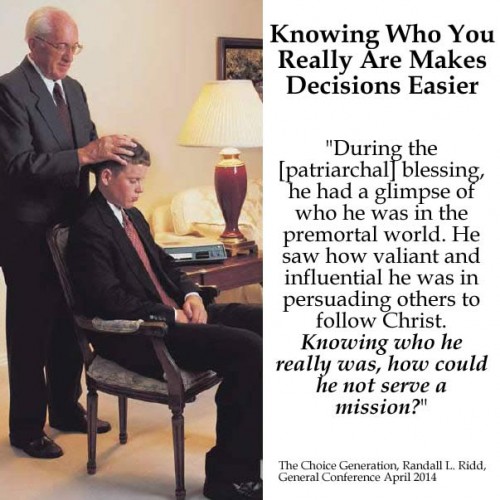 Knowing Who You Really Are Makes Decisions Easier. I have a friend who learned this truth in a very personal way. His son was raised in the gospel, but he seemed to be wandering spiritually. He frequently declined opportunities to exercise the priesthood. His parents were disappointed when he declared that he had decided not to serve a mission. My friend prayed earnestly for his son, hoping that he would have a change of heart. Those hopes were dashed when his son announced that he was engaged to be married. The father pleaded with his son to get his patriarchal blessing. The son finally agreed but insisted on visiting the patriarch alone.

When he returned after the blessing, he was very emotional. He took his girlfriend outside, where he could talk to her privately. The father peeked out the window to see the young couple wiping away each other’s tears.

Later the son shared with his father what had happened. With great emotion he explained that during the blessing, he had a glimpse of who he was in the premortal world. He saw how valiant and influential he was in persuading others to follow Christ. Knowing who he really was, how could he not serve a mission? Young men, remember who you really are. Remember that you hold the holy priesthood. This will inspire you to make correct choices. 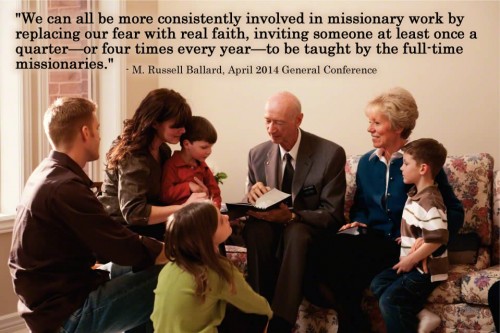 In the spirit of Peter’s example, may I suggest that we can all be more consistently involved in missionary work by replacing our fear with real faith, inviting someone at least once a quarter—or four times every year—to be taught by the full-time missionaries. They are prepared to teach by the Spirit, with sincere and heartfelt inspiration from the Lord. Together we can follow up on our invitations, take others by the hand, lift them up, and walk with them on their spiritual journey.

To help you in this process, I invite all members, regardless of your current calling or level of activity in the Church, to obtain a copy of Preach My Gospel. It is available through our distribution centers and also online. The online version can be read or downloaded at no cost. It is a guidebook for missionary work—which means it is a guidebook for all of us. Read it, study it, and then apply what you learn to help you understand how to bring souls to Christ through invitation and follow-up. As President Thomas S. Monson has said, “Now is the time for members and missionaries to come together, to work together, to labor in the Lord’s vineyard to bring souls unto Him.”

My great-great-grandmother Hannah Maria Eagles Harris was one of the first to listen to Wilford Woodruff. She informed her husband, Robert Harris Jr., that she had heard the word of God and that she intended to be baptized. Robert was not pleased to hear his wife’s report. He told her he would accompany her to the next sermon given by the Mormon missionary, and he would straighten him out.

Sitting near the front of the assembly, with a firm resolve to not be swayed, and perhaps to heckle the visiting preacher, Robert was immediately touched by the Spirit, just as his wife had been. He knew the message of the Restoration was true, and he and his wife were baptized.

Their story of faith and devotion is similar to thousands of others: when they heard the gospel message, they knew it was true! As the Lord says, “My sheep hear my voice, and I know them, and they follow me” (John 10:27).